Go To This Product's Details 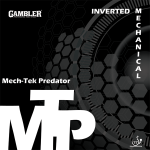 So to disclose this, I received a free sheet in 2.1mm as a giveaway. I also purchased a sheet each in red and black afte
↑